With guidance from Dr Olivier, two local believers will translate the first texts (parallel with Dr. Olivier's own concurrent translation. These two (Domingos and Raimundo) will then call 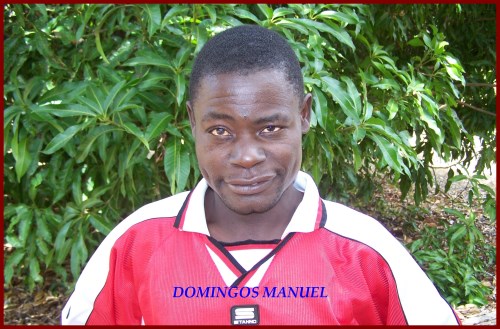 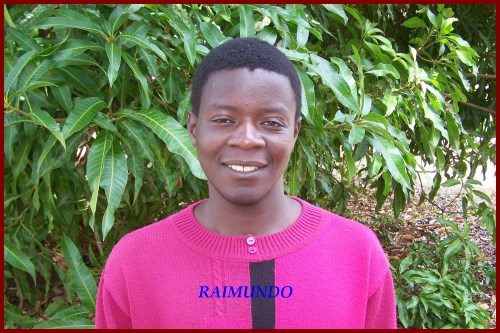 two other local believers (Lodriques and Bernardo) as a first control group to listen to their translation. Dr Olivier will then check that text on his own and with the three Mother Tongue Translators, employing the control group when necessary as well. Once that is done, that will be called the first draft. This first draft will be employed in Muapula in order to check it “in the field” as well. From there on one will move to a second draft and proof reading. 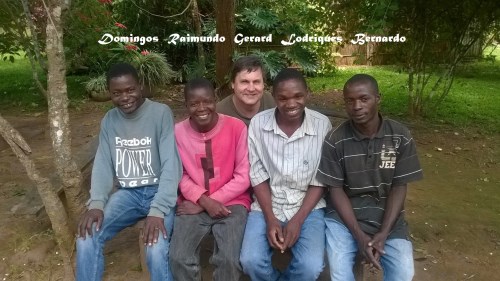 
SEE THE HOME PAGE FOR THE PLANS AND AIMS FOR 2020

The project is indeed more than just translating the Old and New Testament. It is the BIBLE in Makhua that needs to be translated and printed. This means the integrations of the existing New Testament with the Old Testament as it develops. The ultimate goal is to help the Makhuas write their own history by giving them… His story. The Bible in Makhua Shirima will enable them to know God’s heart. His burden is to do unto them that which we would have others do to us; showing practical love through putting into their hands that which will remain with this people group until the day Jesus comes again – the Bible in their language!

Dr Gerard Olivier worked on the Makhua Shirima New Testament from 1998 until 2006. He and his family lived in Muapula for 8 years. After arriving he first learnt Portuguese, and then painstakingly started to analyze the Xirima language before translating the New Testament into this language with the help of two language helpers. During this time he completed his PhD – focusing on combining Biblical Greek and Applied Linguistics – a technique that he subsequently applied to the whole process of the translation. In the process, he together with the Van der Merwes systemized the orthography and he started to write a basic grammar and dictionary for Shirima.

He had a few locals helpers that translated with him – especially Domingos, who has a wonderful and natural gift for this. He finished the Shirima New Testament in 2006. The inauguration of the Makhua Shirima New Testament in April 2007 was a very special event. The small Makhua church that was planted in 1996 by Rev Frits van der Merwe, was ecstatic about the precious gift of God’s Word in their language. 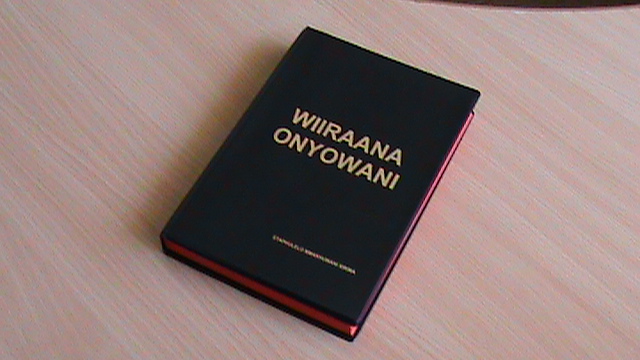 The almost zero knowledge of the Bible on the part of the Makhua Xirima people underlines the need for a Bible Translation on the one hand, but on the other hand it also poses a practical challenge – how does one establish some Bible knowledge amongst them while they are still waiting for the whole Bible. The opportunity arose to us and existing English Children’s Bible and only replace the text – using the lovely colour illustrations etc just like they are. The translation of a Children’s Bible has several advantages: It is simple to read and can be employed at the school as well; it’s illustrations makes the Bible stories more vivid; it can serve as a very handy bridge between the existing New Testament and the impending Old Testament and it also serves to convey some basic and vital Bible Knowledge. Pastor Frits, his son Willem and some Makhuas translated the text in 2006/7 and Dr Olivier undertook the final phases of it. With the aid and tremendous experience of rev. Giep Louw, we were able to “piggy-back” onto an Africa wide order of these Children’s Bibles – only having to pay for the printing without having to do the illustrations etc. This Bible has more than 70 great stories from Old and New Testament. We called it Inyaha Sitokoko sa mBibiliyani – the Great Stories of the Bible” – since the market for it amongst the Makhua Shirima is much wider than just children. In February 2009 we received these wonderfully illustrated Bibles from the print in Singapore and some of them have been delivered to Muapula already! 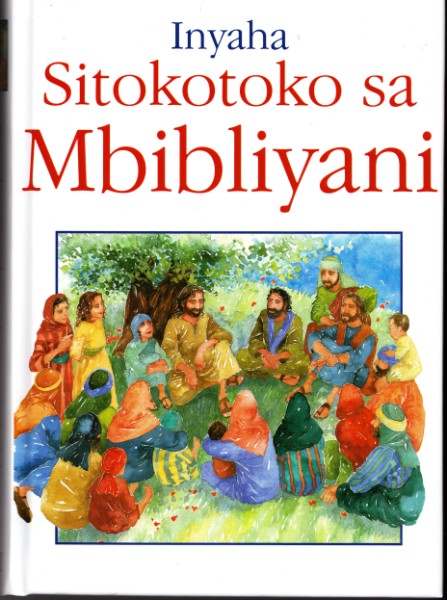 History teaches us that any solid church planting effort and pioneer missionary endeavour goes hand in hand with the translation of the Bible into the local vernacular. Bible Translation and missions amongst the unreached is inseparably linked. The work among the Makhua Shirima in rural Niassa Province is such a pioneer outreach. Although there is an existing translation in a “related” Makhua Shirima dialect, it is written using a very poor, almost totally illegible orthography which virtually ensures no access to the Bible for almost all Makhua Shirima people. This existing translation also frequently displays shocking syncretistic elements – it is perhaps a good thing that almost no Makhua Shirima speaker can read it! For all practical purposes we consider the Makhua Shirima people to be without the Word of God. Very few of them understands Portuguese well. One of the most basic tools in our missionary effort amongst the Shirima people is the Word of God and therefore it needs to be translated. 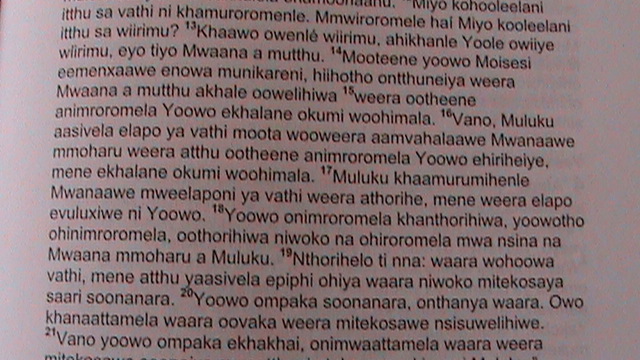 
Here is some linguistic background about the Makhuas:

According to Newitt (1995: 62 – 63) the distinctive Makhua dialects originated from one Makhua language that was spoken about a thousand years ago. “The Makua language is now spoken in dialects sufficiently distinct to suggest that a thousand years may have passed since the break-up of the original Makua speaking group”. There are no clear answers as to the etymology of the word “Makhua” . Hypotheses vary from “savages” (thus a non Makhua term ascribed to them from the outside) to “person who yell” (okhuwa/okhuwela means to yell or shout for joy) to “those who come from Goa” (thus “MaKoa”). According to Prata (1960: 3) the most plausible solution is found in the word “nikhuwa” which probably comes from nikuwa and which means “an extensive desolate marshland” or even “jungle”.

The history of the Makhua Shirima and its language family can be described as follows (2000 Ethnologue):

MAKHUWA-SHIRIMA (WEST MAKUA, SHIRIMA, ESHIRIMA, CHIRIMA, SHIRIMA, MAKHUWA-NIASSA) [VMK] 900,000 (1996). Centre may be Mada, south of the Lugenda River in Niassa Province. Niger-Congo, Atlantic-Congo, Volta-Congo, Benue-Congo, Bantoid, Southern, Narrow Bantu, Central, P, Makua (P.30). Probably not intelligible with the Metto dialect of Makhuwa. Survey needed.
For a long time there was a lot of uncertainty about how many Makhua languages there really are. The bigger groups were always mentioned, but just how many languages are there in the Makhua family? This is made even more complex by the fact that there are no uniform understanding of where the absolute line lies between a language and a dialect. According to a cognate count method there are over 90 % similarity between Spanish and Portuguese. Makhua Shirima and its closest relative in the Makhua family (Meto) according to the same method show only a similarity of in the 70 %. Yet there are people who would describe Shirima and Meto as Makhua dialects and Portuguese and Spanish as distinct languages!
The most scientific and thorough division that is available was done in 2001 by Oliver Kröger (from SIL or Sociedade Internacional de Linguística). He/they distinguish between 8 bigger and 4 smaller groups that can be summarized as follow:

1. Central Makua, often referred to as E-Makhuwana….It is the dialects spoken in Nampula province, also reference dialect for linguistic description or literature production.
2. Makua-Meto. Spoken in Cabo Delgado Province.
3. Makua-Shirima. Spoken in Niassa Province.
4. Makua-Emoniga. Spoken in Pebane district of Zambezia Province. Since the Moniga people live in a geographic pocket, “surrounded” by Lomwe-speakers, their speech is often considered as dialect of Lomwe.
5. Makua-Emarevone. Spoken in Moma District of Nampula Province. Of all coastal dialects, this is the most distinct from the central variant.
6. Makua-Esaka. Both on the border between Nampula and Cabo Delgado Province. Maybe intelligible with Makua-Meto.
7. Makua of Tanzania. Very Probable includes the Makua of Rovuma.
8. Makua Enahara, spoken on Mozambique Island an in the neighboring districts on the continent.

Lomwe is considered by Kröger as “another language, but closely related to Makua”.